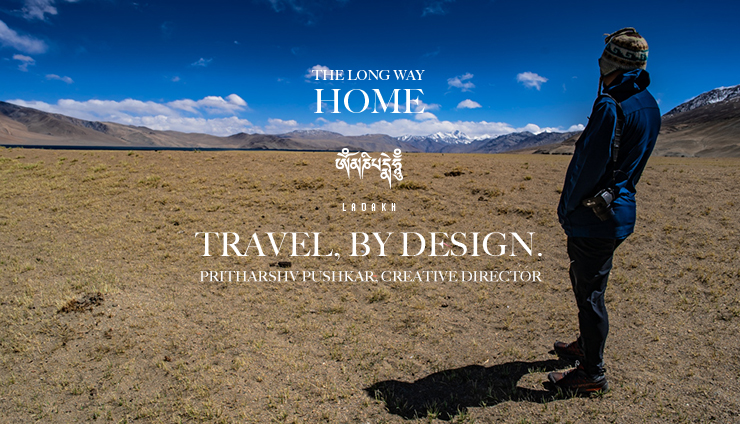 A long time ago,  I went to Kashmir on a school holiday, and it was like going to another planet. I loved it. I was also away from my family, and that was a thrill, to be far, far away. That set in motion my love affair with mountains, and of far, remote, cold places with complex histories. I realised there was immense pleasure in changing air, and that possibility of a transformation.

It has allowed me to know about the world, and to see how other people’s problem are closely related to ones’ own.

Staying away from home also meant a pause from the confusion of deciding a career. I wanted (at different times) to be 1. An architect 2. An ad guy (ad man?) 3. Photographer 4. Designer. My mom wanted me to be a doctor. By the end of the trip I had made up mind, weighing the various pros and many cons to pursue design.

Decades after that first trip, travel for me is about “times of pause”. To take stock, breathe in, realise you are a lost soul in a fishbowl and hit reset. It has allowed me to know about the world, and to see how other people’s problem are closely related to ones’ own.

Design is an immersive activity, and I have, over the course of all my travels learned and imbibed things that I use everyday. Like the use of typography across cultures. I’m fascinated by how basic colours are perfectly formed and kerned freehand letterforms that my photoshop addled brain cannot decipher. I have discovered that the best compositions need maybe at most two colours. I am surprised (in a good way) to find pop culture in the most unlikely settings. Like this poster for a fashion show auditions in a remote village in Arunachal Pradesh.

I am a huge advocate of visiting the same place numerous times. It lets me see things afresh, from new experiences and learnings, pretty much like the design process.

It was two years since our last big trip. We had just bought a car/ truck big enough for a really long road trip. A coastal trip didn’t quite cut it. Ladakh became pretty obvious. We were there on a short trip a year ago, and certain memories from then made us want to go back for a longer stretch. Except this time we wanted to avoid all the tourist traps and experience it more head on. No hotels. To be forced to come to terms with the place we were in. We would go at our own pace and choose our own adventure.

By this time a photographer friend decided to tag along, and over numerous beverage soaked evenings a route was detailed out that looked challenging enough!

A 8000 km round overland trip that would take us across Gujarat, Rajasthan, Punjab, Kashmir, Ladakh, Himachal, Haryana and back. We’d go across Rajasthan to the westernmost border till Tanot.

By the time we would  finish, we’d reach the northern most village in India at Turtuk and the eastern most border at Chushul. We’d endure 49 degrees in Rajasthan and – 15 blizzards at Karzok. We’d crossed 7 of the 12 highest motor able passes in the world. The landscape would unfold like a non-stop epic film in 360 degrees of 3-D realism, through desert, through mountain passes and deep into small towns and big cities teeming with life and newness. We prepped for about six months before the trip for weather, road conditions, equipment, safety, etc. We would go through the route over and over again till we had memorised it. We made plans and then we re-planned. And we re-planned again! These routes are less travelled for a reason: they feature terrifying drop-offs, unpredictable mudslides and a complete lack of concrete paving.

We were in for quite a ride, traversing the landscape for hours at a time. Ladakh roads can be tough to navigate and getting around takes persistence: it can take up to eight hours to travel as little as 150km. Winding along the precarious roads at altitudes that reach nearly 6,000m rewards you with sweeping mountain views, studded with stupas, prayer flags, monasteries, otherworldly rock formations and possibly the most breathtaking landscapes in the world.

Sony gave us photo equipment for the duration of the trip and we ended up shooting almost 6 hours of footage and 16088 photographs.

If ever a human needed reminding of his overall insignificance in the larger scheme of things, Ladakh is the place for it. The sheer vastness around you can shrink your sense of self to nothing. Glance up at the cotton clouds in an impossibly blue sky, and you might think this is home to giant beings that walk the earth. This isn’t for the fussy tourist who is not keen on living in a Ladakhi home, guzzling their deliciously disgusting butter tea, their momos and thukpa. Phones don’t work. Bathwater if at all smells fragrantly of wood-smoke. Non-vegetarian food has to be planned in advance as the Buddhist majority will not cut a carcass. Diesel freezes overnight. There are no ATMs. The nearest bank is 170 kms in either direction. There are no doctors save for the ones in army camps. There is no TV.

The eerie silence makes you contemplative of Ladakh as a whole and its people, warm-hearted despite the wintry bleakness of their surroundings. There is nothing between you and a millions stars in inky blue nights.

And these are the exact reasons why I will be back.